The HISTORY OF DEVELOPMENT OF ALC “TREMBITA”

“Trembita”, an additional liability company, is the most powerful light industry enterprise in Ukraine. 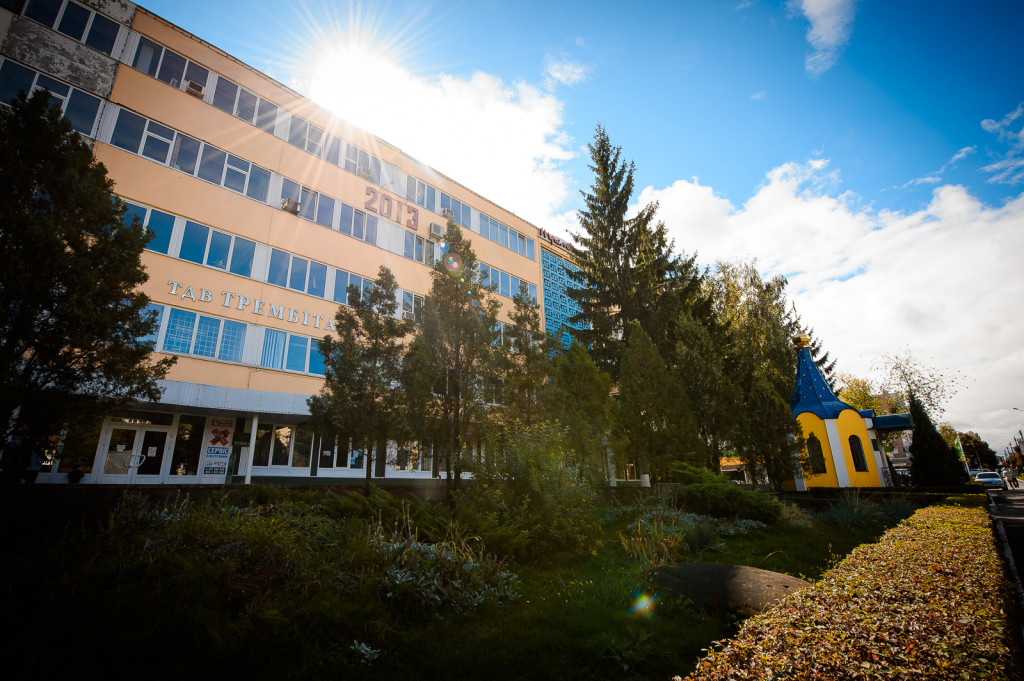 Since the establishment in 1944, the company was headed by excellent personalities and specialists in their business:
Komarova Emma Georgievna(1944-1945).
Suponitsky Yakov Mikhailovich(1945-1957).
Fedor Vladimirovich Posorenko(1957-1963).
Maria Semenivna Slabosylna(1963-1984) – was awarded the Order of Lenin for merits and conscientious work.
CAL”Trembita” has been working under the direction of General Manager Stankevich Stella Omelianivna since 1984. .
The history of the company has became since September 1944, when, after the liberation of Bukovina in Chernivtsi, a mass tailoring factory was organized with a staff of 35 people. Gradually, the sewing artels joined the factory and in 1957 the number of workers was 970 people. From January 1, 1964, the Chernivtsi Production Sewing Association “Trembita” was founded on the basis of this enterprise. The number of the team reached 1970 people. The association specializes in mass tailoring of men’s, women’s and children’s clothes.

ALC “Trembita” was located in adapted premises in different parts of the city. Therefore, in 1977 it was decided to start the construction of a new factory building on the st. Komarova, 3. In 1978, with the active participation of the workers of the association, the construction of the new premises of the enterprise was completed and equipped with its new high-performance equipment at that time. This greatly improved working conditions, and small sewing areas were eliminated. The association increased the production of sewing products, which were implemented on the domestic market of the Soviet Union.
This situation had remained until 1990 almost unchanged. The clothing industry faced a choice: “to be or not to be” with the collapse of the Union, the break-up of economic ties with enterprises in other regions, manufacturing has declined significantly. The Trembita company did not shut down production facilities only thanks to the decisive, consistent activity of the General Manager Stella Omelyanivna Stankevich. Timely in December 1991, the management decided to take the company for lease with the right of redemption. Trembita opened a joint-stock company on June 30, 1993.  Trembita is an additional liabilaty  company in 2010.
Due to the successful course of management for cooperation with western partners, attraction of foreign investments, introduction of the latest technologies and re-equipment of the company – “Trembita” not only continued its existence, but it begans to intensively develop.
It begans cooperation with the Italian firm Confitale in 1992. Since 1993, the activity with foreign firms has expanded, cooperation with the German firm Kaiser has begun. And in 1995, 93% of total production was cooperation with foreign firms.
The high quality of products is achieved thanks to the technical re-equipment of the enterprise. In 1996 a new boiler house was built on gas fuel. The line for moisture-heat treatment of products of firm “Indupress” with software is installed. From 1997 to 2013, ALC”Trembita”, at its own expense, completely rebuilt the enterprise with the equipment of a new generation of such leading companies as Pfait, Indupress, Durkopp, Vastma and others.
In 1997, President of Ukraine L.D.Kuchma,who highly appreciated the achievement of the team, visited the OJSC “Trembita” . In his message to the Verkhovna Rada, the president of Ukraine called “Trembita” one of the best light industry enterprises for high professional skills, establishing the activity of production and for personal contribution to the development of our state. Chairman of the Board of OJSC “Trembita” – General Director S.O. Stankevich was awarded the Order of Merit of the 3rd Degree.
Currently Trembita is one of the undisputed leaders in the men’s clothing market of Ukraine, near and far abroad. The company operates stably, constantly increasing production volumes. The manufactured products are sold in Ukraine, Germany, Italy, France and the United States of America.
ALC “Trembita” has cooperated with many foreign partners: KAISER (Germany), ROI ROBSON (Germany), HUGO BOSS (Germany), PIERRE CARDIN (Germany), DRESS MASTER ( “MARK SPENSER” (England), “NEW TREND” (England), “CONBIPEL” (Italy), “MANTEX” (Italy), “BENETTON” (Italy), “ABBIGLIAMENTO” (Italy), “KAPPAHL” (Sweden) since the acquisition of independence. Now Trembita actively cooperates with: FORMENS (France), NIGITEX (Italy), WALKER (Germany), ISABELL (Germany), POLARIS (Austria).
The competitiveness of Trembita products is confirmed by international and national awards:
1. “Best Trademark” – Geneva, 1997.
2. “Order of Honor” – ICA from 12.08.2002.
3. For significant achievements in the development of light industry in Ukraine, the issue of sewing products at the level of world standards, as well as fruitful international cooperation.
4. OJSC “Trembita” was accepted as a collective member of the International Personnel Academy – 29.04.2003.
5. Products under the trademark “Trembita” are listed in the international catalog “Register of the best goods of Ukraine” – June 2003.
6. Award winner of the All-Ukrainian contest “100 Best Goods of Ukraine” – March 2004.
7. Diploma and symbol of the winner of the All-Ukrainian contest “100 Best Goods of Ukraine” – March 2004.
8. Diploma of the European Business Assembly “European Quality” – 2007.
9. Diploma and symbol of the winner of the All-Ukrainian competition “Leader of the branch” – 2012.

However, the workers are the greatest pride of the enterprise !!! These are specialists of the high class, which have sharpened their skills for years. Thanks to whom the company exists and can be proud of its products far away Ukraine.

The management of ALC “Trembita” expresses its deep gratitude and respect to every employee of the enterprise.